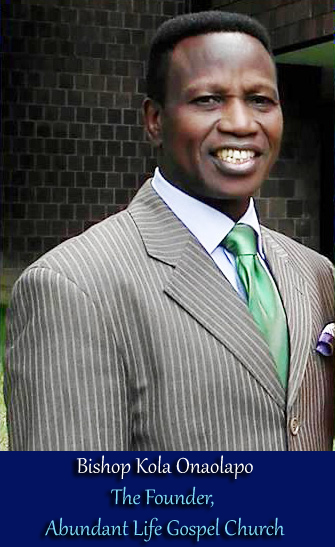 Late Bishop Onolapo was the Founder of Abundant Life Gospel Churches with Headquarters in Agege area of Lagos.

He was born on July 27, 1957 to Pa. and Mrs. Onaolapo in Erin-Ile, Kwara State. Pa Onaolapo was a business merchant when he lived until his death in 1984.

His siblings are Joana Gana, the wife of the late Professor Gana, a university don and first Vice Chancellor of the Birgham University in Nassarrawa State, Anna Oluyori, wife of the grandson of King of Kabba, Pa. Atikekerejolu Oluyori, Kehinde Onaolapo, a lecturer of the Kwara State College of Education, Ilorin, Taiwo Onaolapo, a Business man. He is half-brother to Professor Joshua Onaolapo, a professor of Pharmacy in Ahmadu Bello University, Zaria.

In 1975 he got admission into Ahmadu Bello University’s School of Basic Studies and later was admitted into the University’s Faculty of Science where he studied Chemistry.

He recieved the baptism of the Holy Spirit in 1976 and since then has been preaching as a student in the university where he was involved with the Evangelistic outreaches in Samaru, Zaria. As a student pastor he preached in many crusades in Zaria. Many people were not sure if he was a student or a pastor.

After graduating from Ahmadu Bello University in 1980, he was employed by the Plateau State Government to work as a teacher in Jos. It was while he was teaching he had an encounter with God.

Bishop Onaolapo would usually wake up at 3 a.m. to pray. On this particular day when he woke up to pray, he heard a voice saying to him, “I will be calling you to preach the gospel”. Two weeks later, the same voice came asking him to fast and pray in preparation for a visit from God.

He started the prayer and fasting and on the following day by 4 am while he was trying to rest after a session of prayer, he was visited by Jesus in his room.

With a fresh message on the doctrine of the Holy Spirit, Abundant Life Gospel Church became one of the fastest growing Pentecostal Churches in Ilorin and its environs, with a large number of people accepting Jesus Christ as Lord and saviour. Other branch Churches were soon established in the region in response to the aspiration of the people. As at 2012, Abundant Life Gospel Church had 14 branches all over Nigeria.

Late Bishop Kola later moved to Lagos, Nigeria to plant another Church in October 1991. As an Evangelist to the core, he believed in grass root, one-on-one soul winning. He fulfilled this vision through Kola Onaolapo World Outreach Ministry, (KOWOM) through which he conducted evangelistic crusades around the world.

His world outreach journeys around the world took him on several occasions to West African Countries, the United Kingdom, Canada and United States (especially Baltimore, Maryland in US), during which he built working relationships with Church leaders and Ministers of God. He also worked selflessly with other great men of God through affiliations with Pentecostal Fellowship of Nigeria(PFN), Christian Association of Nigeria (CAN), United International Association of Pentecostal Bishops and Kingdom Way College of Bishops, Maryland, United States. He was married to Rev (Mrs.) Janet Onaolapo and the marriage was blessed with 4 children. He was called to glory on the 14th of Oct. 2012. 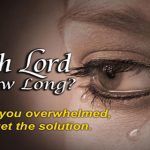 THE ANSWER TO YOUR QUESTION, O LORD, HOW LONG? 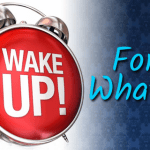 WAKE UP CALL UNTO WHAT?

WHO IS JESUS? KNOW HIM BY THESE 10 ATTRIBUTES 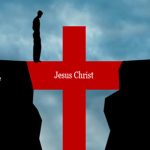